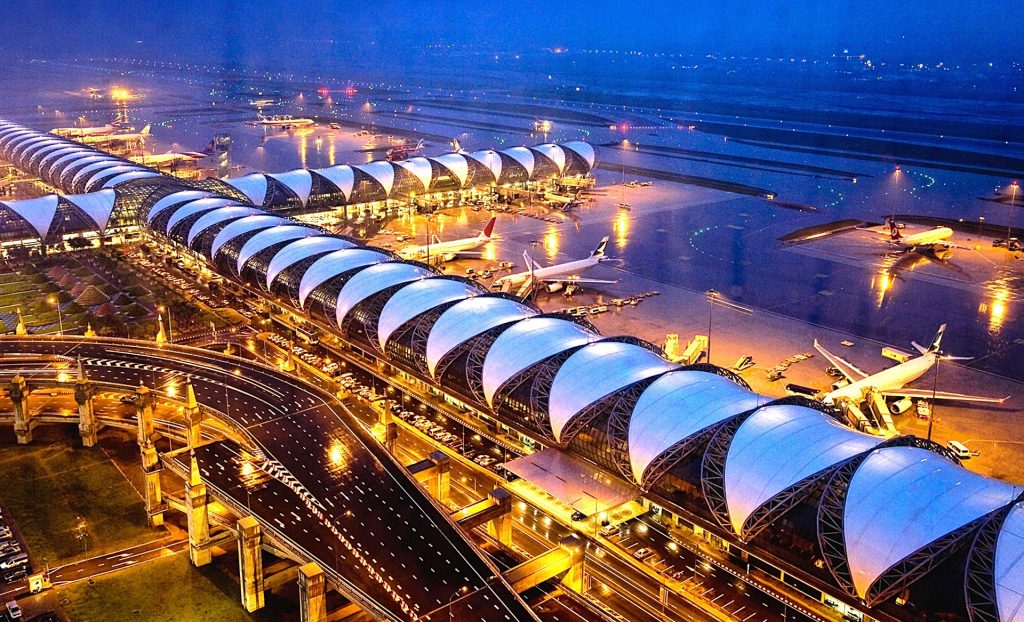 There are two Bangkok airports. It is important to know which airport you are arriving at and departing from, especially if you have a flight connection in Bangkok.

Major airlines and low cost carriers use different Bangkok airports, and it can take two hours to travel between the airports.

Suvarnabhumi airport (BKK) is the main Bangkok International airport and is the regional hub for many international carriers, and the home of Thai Airways and Bangkok Airways. Around 50 million passengers pass through Suvarnabhuni each year, it’s big and busy.

BKK is located 30km east of Bangkok city centre and can be reached by airport rail link that connects with the BTS/MRT network. Or you can take taxis or buses. Don Mueang (DMK) handles low cost carriers and some charter flights. It is located north of central Bangkok and is linked by local buses and a very slow local train.

For most travelers the most convenient way to get to and from the airport will be by taxi. The closest BTS/Metro stop is Mo Chit but you’ll need to get a cab to/from there.

Terminal 1 is for international flights. Terminal 2 is for domestic flights.

The distance between Suvarnabhumi Airport (BKK) and Don Muang Airport (DMK) is 29.5 miles (47.5 km). But because of Bangkok’s atrocious traffic the journey between the two airports can take two hours.

A free shuttle bus runs between BKK and DMK from 5 am to midnight. The official journey time is 50 minutes but in reality it will be longer.

Alternatively a taxi will cost about 400-500 baht. Very cheap and very slow public buses are also an option for cheap charlie travelers.

So when you are booking your flights allow lots of time to get from one airport to the other. Allow time for collecting bags, immigration and check in. All can have big queues at these very busy airport.

Don Mueang (DMK) is the original Bangkok airport and one of the world’s oldest commercial airports.

Don Mueang airport was used by Japanese occupiers during World War II and was heavily bombed by allied forces. The RAF briefly controlled the airfield from September 1945-March 1946. During the Vietnam war the US Air Force used Don Muang as a command post.

At the turn of this century Don Mueang was the 14th busiest airport in the world and was operating at the limit of it’s capacity. It was a hub for much of Asia’s air travel. In 2004 over 160,000 flights flew from DMK. That equated to 40 million passengers and 700,000 tons of cargo. So a bigger airport was planned and in in 2006 Don Mueang airport was closed when the new Suvarnabhumi airport (BKK) opened.

However in March 2007 Don Mueang was reopened to take some pressure off Suvarnabhumi while repair works were undertaken. Initially this was to be a temporary measure with Suvarnabhumi handling international flights and Don Mueang handling some domestic flights. But Don Muaeng stayed open and in 2012 it started handling international flights from low cost, non connecting carriers. By 2015 DMK was the largest low cost carrier airport in the world. Suvarnabhumi airport (pronounced su wanna boom) opened in September 2006. It is sometimes referred to as Bangkok International Airport. The name was bestowed by His Majesty King Bhumibol Adulyadej of Thailand, and means ‘Golden Land.’

BKK has 3 terminals serving around 100 different airline companies. Terminals 1 and 2 handle international flights while terminal 3 is the domestic terminal.

This modern airport has all the usual facilities that you would expect of a world class airport including restaurants, bars, duty free shopping, currency exchanges and ATM’s.