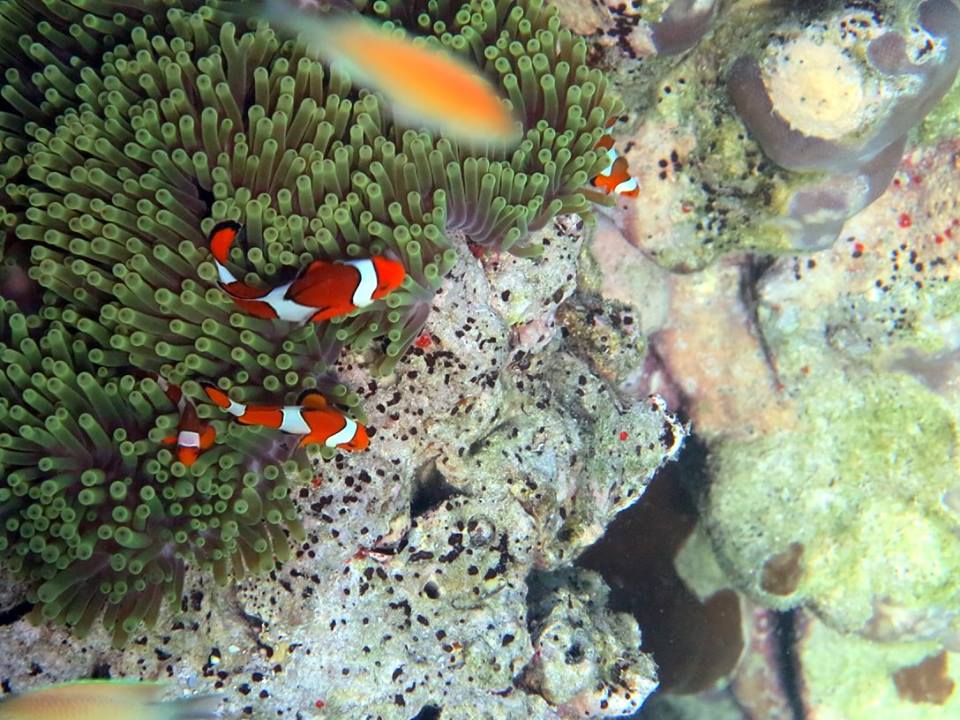 You may know of the Clownfish from the animated film Finding Nemo. They are a common sight in the seas around Thailand, if you know the right places to look, and their characteristic features to look out for. Clownfish (members of the Pomacentridae family) are special little fish that even the most experienced snorkeler can’t resist.

An unmistakable sight around reefs, Clownfish are bright orange, with three vertical white stripes around their bodies, and fringes of black outlining their fins. These fish are extremely fast, constantly darting in and out of the anemones tentacles.

Clownfish come in many different sizes, the largest reaching lengths of 13cm, whilst the smallest can barely grow to 5cm.

They prefer warmer tropical waters and predominantly live in sheltered reefs or in shallow lagoons. More specifically, Clownfish have formed symbiotic mutualisms with sea anemones. Although sea anemones are lethal to other fish, the Clownfish has evolved a mucous membrane on its body to protect itself.

Clownfish and sea anemones provide many benefits to each other. Fecal matter excreted by the Clownfish provides essential nutrients to the sea anemone. In return, the anemone protects the Clownfish from predators, whilst simultaneously providing a constant supply of food. Clownfish, like most Anemonefish are omnivorous. They mostly eat small zooplankton, such as copepods and tunicate larvae. However, they also eat algae and feed on undigested food from their host anemones, as well as dead anemone tentacles.

Like many other sea creatures, Clownfish are sequential hermaphrodites: they are born males and, once they mature, a select few will then become females so that there is always one mating pair in a group of anemonefish at a time.

As well as homes, the anemones also act as nest sites. The female Clownfish lays eggs on a flat surface close to her anemone host. They usually do this around the time of the full moon and their reproductive cycle closely follows the lunar cycle as the fish can sense the strength of the current. Males guard the eggs until they hatch 6-10 days later.

There is a strict hierarchy established in a group of Clownfish. The dominant female, usually the most aggressive and largest, will mate with the largest male and form a colony. Clownfish tend to live in small groups, including the mating pair and a number of juveniles.