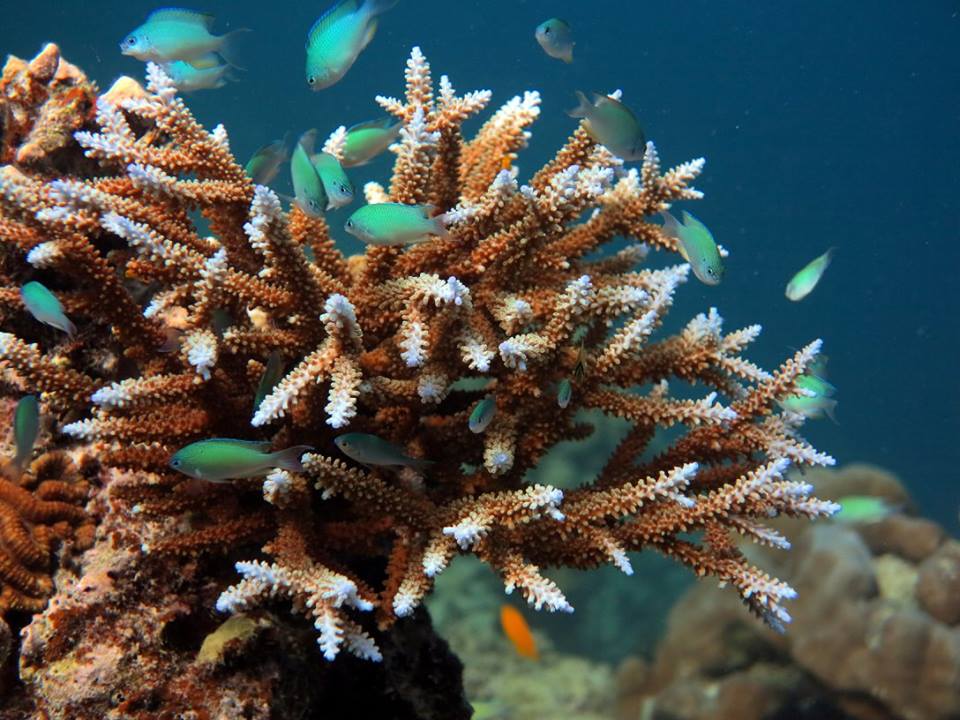 Following on from last month’s post about what are coral reefs, this month we will look at coral health including bleaching and diseases.

Coral reefs are living organism’s made up of millions of polyps and these polyps are susceptible to disease. Coral diseases can spread through a reef colony much like a disease spreads in our world. A reef can die quickly and once it’s gone it may never recover.

What is coral disease?

Coral disease is a part of the natural cycle, old coral dies and new coral grows all the time. But scientists believe that the rate and severity of coral disease is on the increase due to climate change. Harmful and infectious bacteria spreads quickly as do parasitic fungi.

Types of known coral disease include black band, red band, white band disease, white plague, white pox, dark spot and yellow blotch disease. While the pathogen causing some of these diseases is known others have not yet been identified. Another problem is that bacteria evolves rapidly.

Just as with humans, stress makes corals more susceptible to disease. Stress often comes from non living factors such as polluted water or increased temperatures. This stress weakens the coral so that it cannot fight off bacterial infection.

Many of the factors that cause a reef system stress are man made including degrading the marine environment from over fishing or destructive fishing practices or sedimentation from coastal development.

What is coral bleaching?

Coral bleaching is one of the most visible signs that a reef is stressed. It is the phenomenon of a reef losing all it’s colour due to the stress of changing water temperature. The reef loses it’s zooxanthella inhabitants (and the zooxanthella lose their photosynthetic pigments). The reef therefore appears to be bleached.

While bleaching is often isolated to small sections or reef it can spread over vast areas if water temperature change is sustained for a long period such as in an El Nino year. Other stressors exacerbate bleaching, for example, sedimentation, pollution and fresh water run off (caused by heavy rains).

What happens to a sick reef?

When coral dies it’s space on the reef is taken by other parasitic inhabitants like algae which can overrun an unhealthy reef. (An example sometimes seen in Thailand is Padina (Peacock algae) which colonizes reefs after bleaching). Fish and other marine life need a healthy reef to thrive and survive. Fish populations will rapidly die on an unhealthy reef. So the whole coral reef composition is changed.

Can a sick reef reef recover?

Reefs can recover from disease and bleaching and South East Asian reefs have shown surprising resilience. But we may be pushing reefs beyond the point of recovery. Multiple stress factors make it too hard for coral to recover. Reefs need to recover naturally, there is no medication we can give to coral. To recover naturally reefs need a healthy environment in which to grow strong.

What can we do to save corals?

We need a healthy ocean for our own survival. The ocean food chain depends on healthy reefs. So by protecting coral reefs we are protecting ourselves. Everything that we put into the environment or take out has an effect. So while we as individuals may feel helpless to stop over fishing or rampant over development of tourist resorts we can all make a difference in a number of small ways. For example:

Reduce, re-use, recycle.
Follow the 3 R’s and help to keep pollutants out of the sea by using less of them and disposing of them responsibly. Examples are batteries, engine oils, plastic bags and fertilizers.

Don’t touch coral.
Corals are not rocks, they are living things and can be harmed by your touch. (You can also get infections from coral cuts). Here is a Green Fins guide to snorkeling best practices to help protect coral.

Get involved in reef conservation. You could donate to a conservation organisation or volunteer to collect coral reef data.