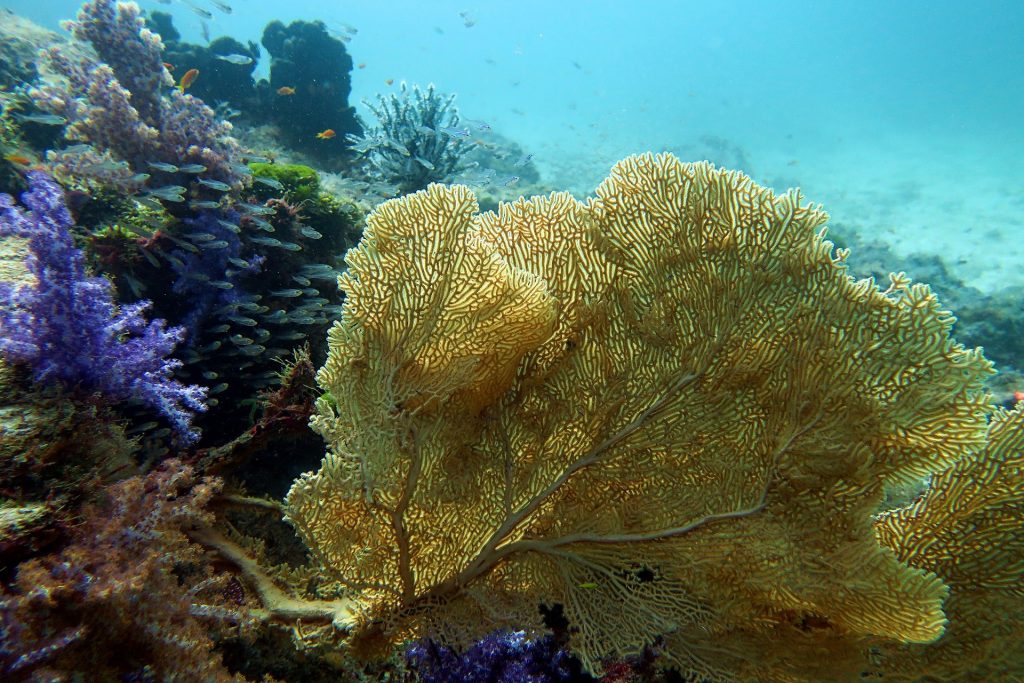 What are coral reefs?

Coral reefs only cover about 1% off the ocean floor yet provide habitat for about 25% of all marine life. They are not just biologically rich but also economically valuable, providing food and income for people around the world. So what exactly is a coral reef?

A coral reef is not one animal but rather a colony of thousands of smaller organisms. Coral reefs are made up of colonies of coral polyps. A coral polyp is a small, soft bodied living organism which can live independently but usually creates reefs with other polyps. They have a hard limestone base (called a calicle) and a tube like stomach open at the top and surrounded by tentacles which can be used for defense and to catch prey.

A reef forms when a free floating coral larvae called planulae attaches itself to a rock or something similar under the sea (like a wreck, an artificial reef or other corals) and then starts to divide itself. Once a polyp attaches itself to the substrate it never moves from that location. When the calicles of polyps join together a larger colony is created, that’s a reef.

Reefs grow slowly over thousands of years (1mm to 10cm per year depending on species) by secreting skeletons of calcium carbonate at their base. The base is called a basal plate and is periodically replaced by the polyp, leaving a small chamber below and raising the reef upwards. Coral Polyps are related to jellyfish and anemones and are actually translucent. The colour in coral comes from microscopic algae that lives on the coral polyps called zooxanthallae. Coral reefs need this zooxanthallae to stay healthy. Coral reefs live in warm tropical water close to the surface where sunshine can reach this algae causing photosynthesis which provides nutrients for the corals to feed on. If coral polyps become stressed from pollution or significant temperature change they evict the algal cells. This causes coral bleaching where the coral turns white and can result in coral death. Reef building corals in the tropics ideally need water temperature from 23°C to 29°C but can withstand colder and warmer temperatures for short periods of time.

Nematocysts are the stinging cells with powerful toxins that corals use to catch prey. Corals usually feed at night on zooplankton and small fish.

Most species of hard coral are broadcast spawners. At certain times of the year they release massive amounts of eggs and sperm into the water which join to form planktonic larvae which is distributed over a wide area by surface currents. This coral larvae, or planulae, that is not eaten by predators then settles on the bottom and metamorphoses into polyps.

There are both natural and man made threats to coral reefs. Natural threats include storms and periods of extreme hot and cold temperature . Corals are also preyed upon by other marine life including fish, worms, sea snails and starfish such as the crown of thorns starfish that became a threat to Australia’s great barrier reef. Reef colonies can recover from a certain amount of damage but sustained damage from multiple factors can stress a reef to the point that it dies completely.

Human caused threats to coral reefs include over fishing or destructive fishing practices like cyanide fishing or bombing. Corals are also mined for building material and reef fish are taken to supply aquariums.

A major threat is pollution from land based run off which contains chemicals, oil or other debris. Pollutants can change nutrient levels in the water which causes algal growth and smothers reefs to death. Deforestation and dredging can increase sediment in the water that restricts photosynthesis of zooxanthallae. Leaking fuels, anti foul paint and carelessly dropped anchors are a few ways that boats can destroy reefs. Divers and snorkelers also break coral heads with their fins. Dragging nets used by fishing trawlers wipe the sea bed clean and discarded nets that get lodged on to reefs will break coral as they move about in the current.

Many different diseases can also attack corals and studies into the pathologies of these diseases is ongoing. The frequency of coral diseases is thought to be increasing in recent years as the quality of the water in which corals live deteriorates.