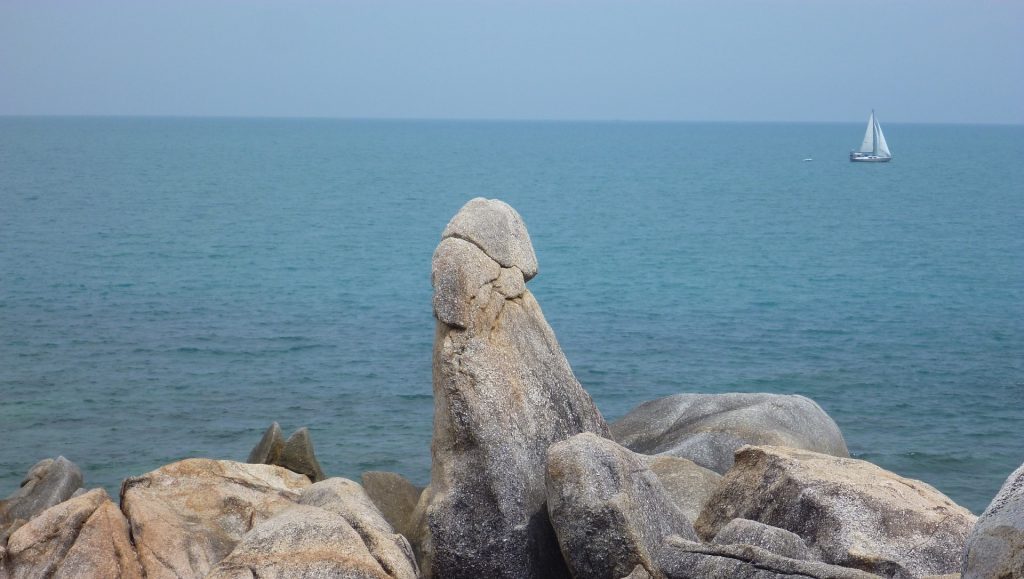 Grandfather and Grandmother Rock are one of the biggest tourist attractions in Koh Samui, hundreds of people come to photograph and be photographed with them every day.

They are two granite rocks down near Lamai Beach (route 4169) on Samui’s south east coast. To reach them you’ll have to walk down a short narrow path lined with small shops and souvenir stalls.

Their names in Thai are Hin Ta and Hin Yai. The tale of the elderly couple starts  in Nakhorn Sri Thamamart (a few hundred kilometres from Koh Samui). Their son was reaching manhood and needed a wife. They searched high and low but a suitable girl could not be found.

The elderly couple knew of someone in Prachuap Kiri Khan province who had a beautiful daughter and they decided to travel there. The dangerous journey would take days in their small wooden boat.

Early into the journey the found themselves surrounded by sharks. Then the wind picked up and the seas started to swell. Their small vessel was tossed around and they both got terribly seasick. Their food and water was lost overboard. Neither of them could swim. By this stage they had also lost their oars, they were lost and drifting.

Then in the distance they saw an island but the wind and tide took them in a different direction. They became very weak, all seemed lost.

Just as they were giving up hope a huge wave washed them both overboard into the sea. Unable to swim and exhausted from starvation they held each other’s hands as they slipped below the surface.

When their dead bodies washed ashore on Koh Samui they instantly turned into the two rocks that are still there today, standing as testament to the couple’s pure intentions.

No one knows what became of their son, some say he joined a monastery, others say his cries of sorrow can be heard on dark lonely nights.