On On Hotel Phuket Town 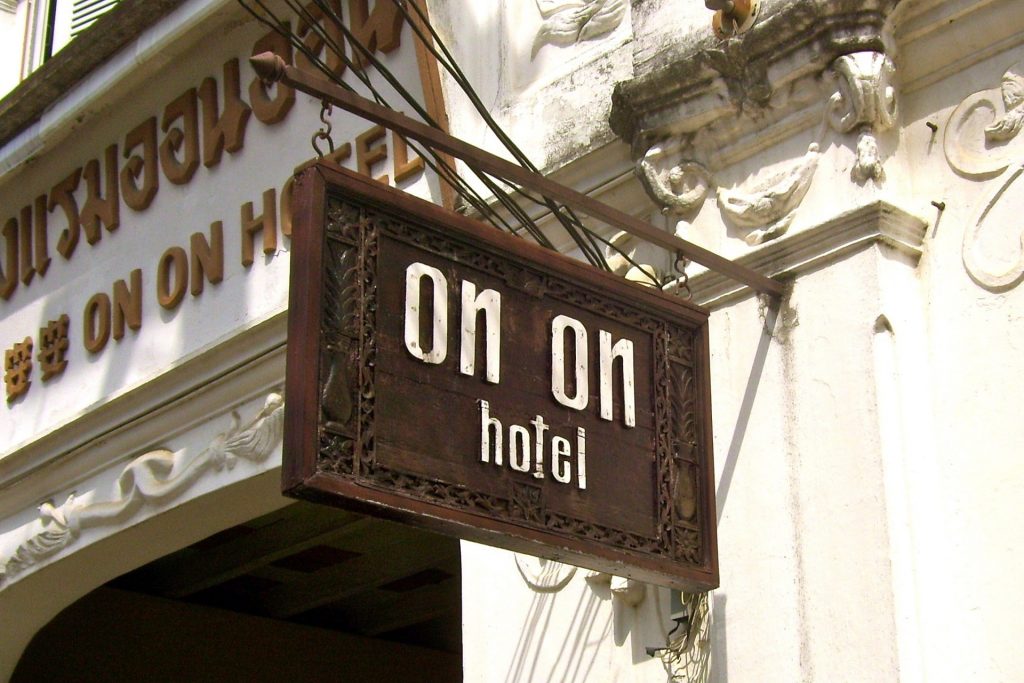 On On Hotel – Phuket Old Town

The On On hotel was the very first hotel to open in Phuket. It’s still there on it’s original site on PhangNa road, in Phuket’s old town. The hotel, which had run in to disrepair has been completely renovated and restored and is now branded as “The Memory at On On.”

The renovation is in keeping with the rest of Phuket Old Town which has been undergoing extensive gentrification and is now the happening place to be for trendy young Thai’s.

Phuket town is also becoming a popular mini break destination for tourists from Thailand’s neighboring countries. The town, which has no beach, provides an alternative holiday experience, away from the usual resorts on the coast.

We recommend a night in town if you have a ferry too catch to Phi Phi the next day. The weekends are especially good because of the walking street in Thalang Road (Lard Yai).

The “On On” in the name comes from the Chinese word Un Un, which means ‘Happiness for all Visitors.’

A nice thing about Phuket Town is how pleasant it is to walk around and enjoy the old Sino-Portuguese architecture. Attractions within walking distance of the On On hotel include the Thai Hua Museum, Baan Chinpracha and the Jui Tui Shrine. Plus Thalang road and soi Romanee. New restaurants, bars and cafes are popping up all the time and it seems like a new piece of street art gets painted on a wall every week. On On Hotel history

When the On On hotel opened its doors for the first time in 1929, it was perfectly located for the European sailors and Chinese traders who came to Phuket to trade. It was also a boom time for the tin mining industry in Phuket.

As the tin mining trade died off and tourism because the main industry in Phuket, most tourists moved to hotels on Phuket’s west coast. Phuket town became the municipal centre of the island, tourists had no reason to visit. A trickle of backpackers with well thumbed Lonely Planet’s still arrived in Phuket town by bus. So the On On hotel became a cheap backpacker hostel.

The On On hotel was used in the filming of The Beach, the Leonardo DiCaprio movie released in 2000. It was used for the scene early on in the movie when Leo arrives at the Khao San Road hostel. Present day On On Hotel

The hotel restoration has been done beautifully, it still retains the Sino-Portuguese style. The rooms maintain the original feel but with the addition of modern necessities such as Air conditioning in all rooms, WiFi, fridges and mini-safes.

The is a choice of private rooms or dorms.

The ground floor lobby area and courtyard is large and airy, a great place to sit and drink a coffee or chat with fellow travelers. There is also a restaurant and bar.