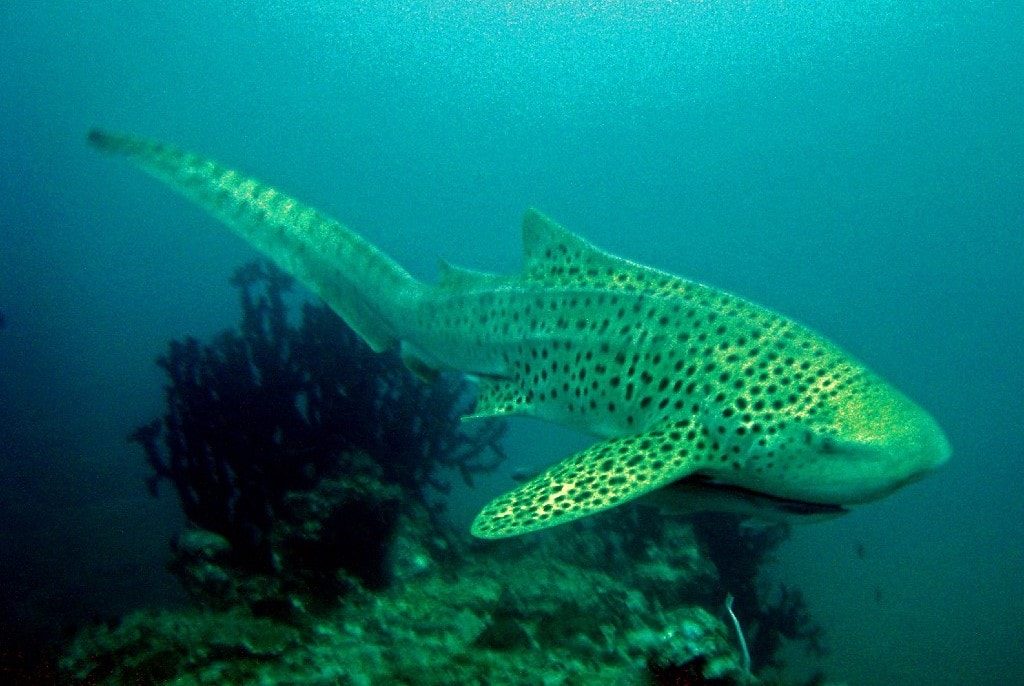 Leopard sharks (Stegostoma fasciatum) are an exciting, if quite rare find for snorkelers in Thailand.  They are distributed throughout the region and could be spotted anywhere. The most likely places are Phi Phi, the Surin Islands or the Similan Islands. But still, you will need to be lucky to see them for several reasons.

One is that the number of Leopard sharks appear to be on the decline, they are considered as “Vulnerable.” Thai SCUBA divers used to see them on every dive but sightings are now the exception, not the rule. Leopard sharks inhabit the sandy bottom just away from the reef so can get caught up in trawler nets which indiscriminately clean up everything from the sea bed.

The other reason is that Leopard sharks are often a bit deep for snorkelers, and if they get disturbed they will swim off deeper out into the sand. Leopard sharks mostly feed at night and spend their day resting on the sandy bottom at the edge of the reef.

Leopard sharks are a sandy colour with dark spots making them well camouflaged to the sandy sea bed. Leopard sharks look different to the typical requiem shark and they have a different swimming motion as well, a beautiful slow sashaying motion. Leopard sharks can be over 2 metres long, about half of which is the tail.

Leopard sharks are able to pump water over their gills which allows them to rest on the sea bed, unlike many other shark species which must keep moving to breathe.

Leopard sharks are not considered dangerous to snorkelers, swimmers or divers. They do have teeth so in theory they could bite if provoked, but in practice they swim away from humans who disturb them. Leopard sharks feed at night on crustaceans and moluscs.

Leopard / Zebra sharks should not be confused with Tiger sharks which are a much bigger and more fearsome shark.

How to snorkel with Leopard sharks

If you see a Leopard shark swimming towards you there is no reason to be scared, just thank your lucky stars and enjoy the show. While their swimming motion appears slow and graceful they can show a sudden turn of speed with one tail flick if they feel threatened, so don’t try to touch a Leopard shark or grab the tail.

If you see a Leopard shark on the sea bed you can swim down for a closer look and to get a better photo. It’s best to approach from the front and edge closer, you may be able to get within a metre or so without scaring them away.