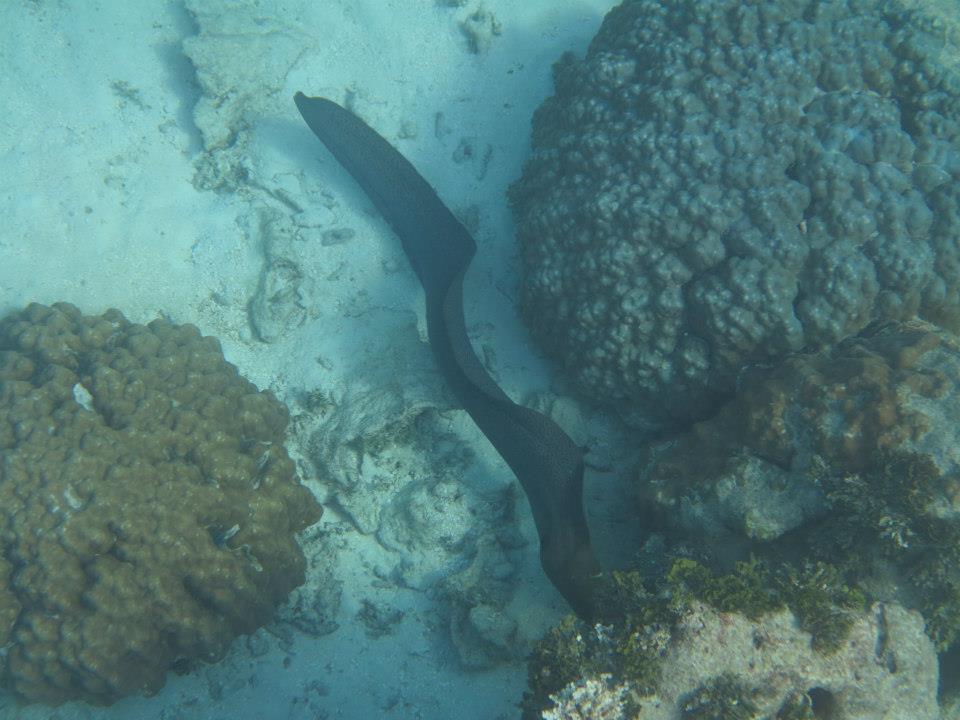 There are around 200 species of Moray Eel in the planet’s oceans. They are fish not reptiles despite their snake like appearance and lack of pectoral and pelvic fins. They are a shy animal but sightings are common in Thailand. The most common one that you’ll see while diving and snorkeling in Thailand is the biggest of the lot, the Giant Moray (Gymnothorax javanicus) which can get to 3 m long and 30 kg in weight.

Most of the time you’ll see a moray eel sheltered in coral or rock crevices. They lay in wait for prey, attacking by ambush. Because, like all fish, moray eels breath by circulating water through their gills you’ll often see the facing upstream with their mouths open and teeth showing. This makes them look more menacing than they really are. Occasionally you will see morays free swimming on the sea bed although this is more common at night.

Despite their ill tempered appearance giant morays are not aggressive, if you leave them and their burrow alone they won’t bother you. But if the poke a finger in a moray eels face you can expect to lose that digit.

In 2007 a local diver at the Similan Islands was feeding a sausage to a large giant moray at East of Eden dive site. This particular eel was well known, she would often come and swim around divers. This diver wanted some good video footage of the eel and he encouraged her out of her lair by dangling a hot dog sausage in front of her. Unfortunately for the diver the eel mistook his thumb for a sausage and bit it off, moray eels have poor eyesight and rely on their sense of smell. Watching the video (below) you can hear the bone being crunched.

Moray eels razor sharp teeth are angled backwards and are used to rip fish flesh apart. Trying to pull out from the moray’s mouth only makes matters worse. Also, moray eels have a second set of jaws within their throat called pharyngeal jaws which are used to pull prey further into the throat. The diver never got his thumb back, doctors replaced it by grafting his big toe onto his hand instead.

Moray eels are carnivorous, eating other fish, squid and crustaceans. An interesting fact is that they have been observed hunting other fish in cooperation with groupers. This is the only know example of inter species cooperation for hunting. Moray eels regularly cooperate with cleaner shrimps at cleaning stations. It is common to observe boxer shrimps inside moray eel mouths. Few other creatures hunt moray eels, those that do are sharks, barracuda and of course, humans.

Moray eels can live to up to 30 years of age. Moray eels lay 10,000 eggs at a time which are fertilized outside of the body. This spawn becomes plankton until the larvae is big enough to swim to the sea bed. Moray eels mate by wrapping themselves around each other, often vertically, it’s a spectacular sight if you are lucky enough to see it.

Other species of moray eel often seen in Thai waters are the Honeycomb moray (Muraena melanotis), Zebra moray (Gymnomuraena zebra) and Fimbriated moray (Gymnothorax fimbriatus). The much smaller white eyed moray (Siderea thyrsoidea) can often be seen in groups all sharing one rocky crevise. Point your camera at them and they may come out to look at their reflection in your lens. The Ribbon eel (Rhinomuraena quaesita) is harder to spot, often on the sea bed in water beyond snorkeling depth. These colourful eels are only 20 cm or so in length. One thought on “Moray Eel facts”