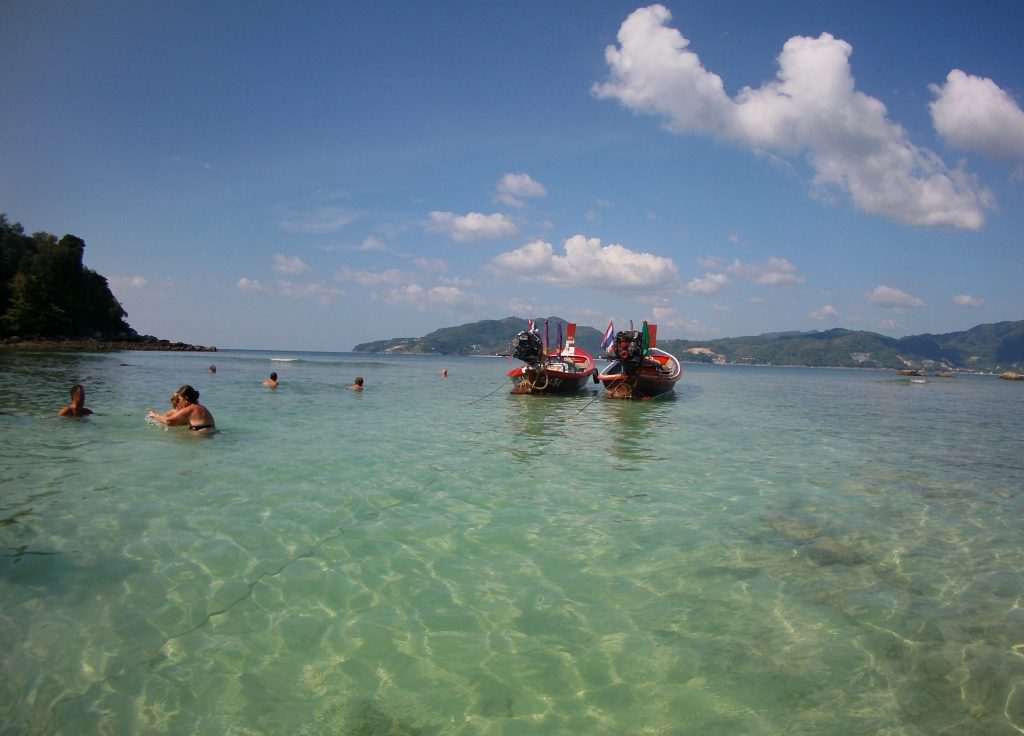 Where to do Phuket Beach Snorkeling

Phuket Beach Snorkeling doesn’t offer the best snorkeling in the world, the reefs don’t have the water clarity of the Similan Islands or the marine diversity of Phi Phi but it can still be fun to don mask, snorkel and fins and go exploring.

Most of the west coast beaches have rocky reefs just below the surface at their north and south ends where keen snorkelers with a bit of patience can find all sorts of fish. Kata beach north and south can be very nice at times (water clarity is really variable). Small schools of fish can be seen as well as small lionfish, rock lobsters, crabs and nudibranchs to name just some of the highlights. The hard corals aren’t that colourful, they are pretty silted up but they are still home to lots of critters. These reefs are also good places to find money, it’s amazing how many people go swimming with bank notes in their pockets 🙂

The reef at the southern end of the beach follows the line of the bay until about 100 metres out where it spurs off north. This area is a good place to look for blue spotted sting rays in the sand.

The reef at the north end of the beach comes out quite a long way from the rocks and it’s worth swimming out some distance to get out of the swell and in to clearer water. There are mooring buoys along the edge of the reef and they are good places to duck dive down and  look for critters. Divers regularly see beautiful oriental ghost pipe fish here. There are also the more plain looking bend stick pipe fish. They really do look just like a stick so if you see one you are a truly eagle eyed snorkeler. They are often found in pairs on the sand at the edge of the reef. A few words of caution about snorkeling from Kata beach. Longtail boats are a danger at both ends of the beach, keep your eyes open for them. Jet skis are even more dangerous. On the reef it’s best to look but not touch. Scorpion fish are more numerous on the reef than you realise because their reflective scales disguise them so well. They are highly poisonous, so are their close relation, the lionfish. Don’t pick up and shells, cone shells are deadly. Coral can be razor sharp and cuts become infected easily in the tropics. Other than that it’s perfectly safe! Enjoy 🙂

The small island off the headland at the north of Kata beach is called Koh Poo (crab island) and the snorkeling there can be very nice too, with healthier coral than on the beach reefs. Strong swimmers can swim there or you could hire a kayak but most people rent a longtail boat. Lontail boats actually aren’t that cheap to hire unless you are a group. It depends on your negotiating skills and how busy they are but about 1,500 baht for an hour is a good price. They get cheaper the longer you rent them for.

Long tail boats are normally only available from November to May when the wind comes from the east and the sea is flat. From May to October the south west monsoon brings the wind from the west and Kata beach becomes more suited to surfing than snorkeling.

Masks and snorkels can be rented on Kata beach. Paradise Beach is a tiny beach just around the headland south of Patong beach. It used to be only accessible by longtail boat from Patong or Karon beach. Then a dirt track was cut through the forest, and now there is concrete road so even cars can get there. It used to be a place to get away from the crowds but now so many people have the same idea that it can be more crowded than Patong beach at times. Even so, the snorkeling about 100 metres out from the beach is pretty good. There is a shallow reef running parallel to the beach that starts at about 2 metres below the surface and drops down to a sandy bottom at about 10 metres. It’s a hard coral reef with some brain coral, table coral, mushroom coral etc plus the odd anemone with resident anemone fish. Moray eels can be seen along with all the usual reef fish. Look out for parrot fish, moorish idols, longtoms just below the surface, bannerfish, goatfish, fusiliers, sergeant majors and much more. There is a 100 baht per person charge to sit at this beach. You 100 baht includes a sun lounger and parking. Paradise beach is an excellent choice in low season because it faces north east and is therefore somewhat sheltered from the waves coming from the south west. When waves are rolling in to Patong and Karon beaches Paradise beach can still have flat sea. On the way to Paradise beach you’ll pass Tri-Trang beach which is also worth a visit.

Ao San (San bay) is a favourite Phuket beach snorkeling spot of ours on the south west coast. It’s close to Naiharn beach on the way to the Baan Krating resort.  It’s a tiny cove that yachtsmen often use to beach their dinghy’s. You can follow the smooth granite rocks around the shore line or there is a small reef right in front of the beach. When the water is clear it can be really quite beautiful.

These are just a few options for independent beach snorkeling in Phuket. There are more, Phuket has a long coastline, they just need to be discovered.

One thought on “Phuket Beach Snorkeling”