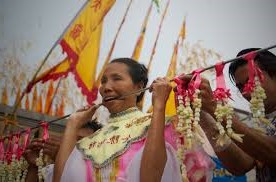 The Phuket vegetarian festival (more correctly known as the Nine Emperor Gods festival is about more than just sticking sharp objects through your face. The festival has deep significance to local people.

Purification of individuals as well as of communal spaces is the principal theme of the festival.

Self-purification is symbolized by wearing white attire and fasting to achieve a strict form of vegetarianism. The purification of communal spaces from dangerous forces (evil spirits) is the principal activity of the spirit mediums.

Here are the rituals briefly explained:

Takes place on the last day of the eighth lunar month of the Chinese calendar, one day before the nine days of the Vegetarian festival.

The ritual is to separate and consecrate the grounds and kitchen at a shrines that will participate for the 9 days of the festival. The locals believe they are cleansed by eating vegetarian food from the kitchen of the shrine. During this time demons & orphan, souls who are believed to have been won over by a Taoist Master and are therefore able to take a first step up the ladder of merit which leads to heaven, are symbolically released in a Heavenly Warrior releasing ceremony. They are then believed to protect the community for the whole festival.

This ritual takes place at each participating shrine in the afternoon and evening of the day preceding the nine days of the festival. The tall lantern poles have nine oil lanterns to symbolize the Nine-Emperor Gods. The lanterns will stay hanging for the duration of the festival.

It is said that at midnight on the first day of the festival the Nine Emperor Gods descend down the poles, this marks the start of proceedings. Their spirits enter incense urns which are placed in a secluded back room of the shrine throughout the festival. Only the censer master and his assistant are allowed to enter the room.

This rirual takes place in the compound of the shrine prior to the Nine Emperor Gods invitation ritual to signify the Jade Emperor God as the head of the Taoist Pantheon.

The ritual, conducted in the early afternoon, pays respect to the spirits of warriors and their horses. Many of the rank and file spirit mediums participating in this festival are possessed by these spirits, who are believed to entertain a position in the celestial hierarchy beneath the gods, but above the ghosts. Vegetarian food, tea and rice liquor are prepared for the spirit warriors, and grass for the horses.

Worshiping ritual for the deceased devotees

The ritual is conducted to pay homage by food offerings to those deceased devotees of the shrine for their lifetime devotion.

The purpose of chanting is to achieve the sensual cleansing as human body is controlled by the nerve center. The shrines conduct chanting two times per day.

The ritual takes place on the evening before the street procession to receive the power of Polaris through the Big Bear (or Seven Stars). According to ancient Taoist beliefs the Big Bear has 9 stars, 7 visible and 2 invisible stars. They are the inheritors, mediators and promoters that pass the power of “Dou Mu” or “Tao Bo” to human beings.

The street processions are conducted on different days in Phuket by each shrine during the festival. This is the part of the Phuket vegetarian festival that has become world famous. The processions give the public the chance to receive the blessings of the gods possessing the spirit mediums. Locals set up altars in front of their houses, placing on them candles, incense sticks, flowers, fruits, sweets & tea. Devotees squat down to receive blessing of the Nine Emperor Gods thru mediums.

Firecrackers are widely used for the festival processions. Locals believe that lighting firecrackers before the palanquin welcomes the Nine Emperor Gods and deities. Fire overcomes impurity and repels evil influence. The locals believe that only those that are cleansed can avoid being seriously burned by the hot coals.

There are 36 rungs for the spirit mediums to ascend then descend. Making a total of 72 rungs.

Devotees cross the bridge to cleanse themselves of impurities and misfortunes that may fall upon them. Once crossing the bridge, a red seal of the Nine Emperor Gods will be stamped on the back of the devotees to signify that they are purified.

The ritual is divided into 2 parts. First the Jade Emperor is bade farewell at the lantern pole in the shrines’ compound by burning the paper palace for the Jade emperor. Then the Nine Emperors are sent off and believed to return to the Heaven. This ritual is conducted on a waterfront.

On the afternoon of the 10th day of the 9th lunar month, the tall lantern pole is lowered in a brief ritual.. After the nine oil lamps of the Tall Lantern are extinguished, the remaining oil is mixed with the oil used to light the altars of the temple during the festival and distributed among devotees. The locals believed that this oil has supernatural curing powers.

This marks the adjournment of the Nine Emperor Gods Festival or Phuket Vegetarian Festival. The shrine prepares meat dishes for all participants in thanks for their devotions, support sand participation.

The Flag of the Nine Emperor Gods

Yellow is the color strictly used for the flag of the Nine Emperor Gods with red ink on it.