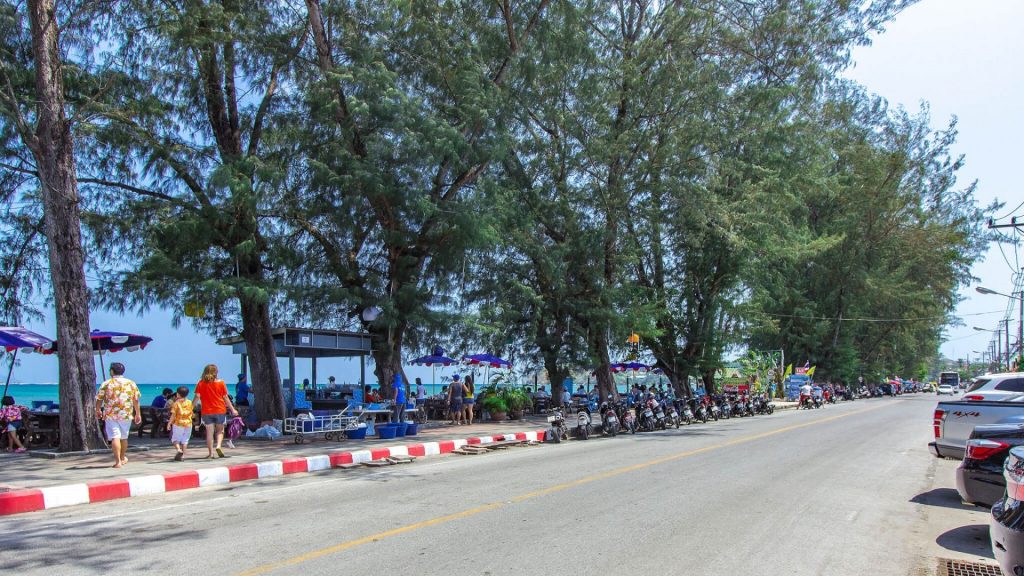 Seafood restaurants and boats to the islands

Rawai beach is one beach in Rawai district. When Phuket people talk about Rawai they could be referring to the general area of south Phuket that starts just south of Chalong pier and includes Nai harn beach, Ya nui beach and Promthep cape. It’s a beautiful district with a sizable expat community.

Rawai beach is not the best beach in Rawai district. You wouldn’t go to Rawai beach to swim because it’s full of moored up long tail boats and speedboats. It also turns into mud flats at low tide, with rocks and coral exposed above the waterline.

Rawai beach is however a wonderful place to sit and eat. The road side restaurants put out tables and chairs along the sea front under the trees. It’s a perfect place for lunch or dinner. The food is Thai Esaan food and seafood. It’s really popular with locals. Ideally go in a group so you can choose lots of dishes and share. Beer is normally served in big bottles with glasses and a bucket of ice, it goes perfectly with spicy food. To get to Rawai beach drive south from Chalong circle. When you reach the end that’s Rawai pier. The seafront restaurants are to the right. To the left are some seafood market stalls where sea gypsies (who made Rawai their home years ago) sell their catch.

In the evening Rawai has quite a few bars to choose from. Nikita’s is a popular bar and restaurant on the seafront, a cool place to relax. There are also lots of girly bars scattered around and a complex of them called Laguna just up the road, heading towards Chalong. It’s ironic that all these bars are here because the old expats claim they moved to Rawai to escape the bars in Patong, but the girls seem to have followed them 🙂

The Rawai area doesn’t really have a centre away from the beach, there are just mazes of streets. It’s fun to hire a motorbike or bicycle and explore.

Long tail boats on Rawai can take you out to nearby islands like Koh Bon or Koh Lon. You’ll have to negotiate a price, it can be good value if you are a group.

For swimming near Rawai head 5 minutes away to Ya nui beach or Nai harn.