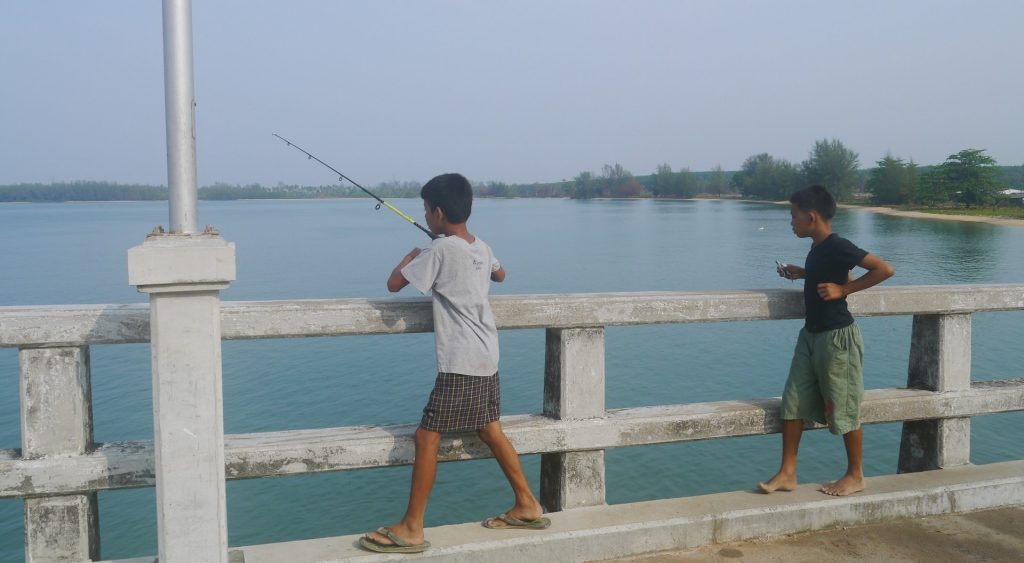 Sarasin bridge at the northern tip of Phuket links Phuket province (island) to Phang Nga province on the mainland. It’s a road bridge so if you are driving to Phuket it’s the first thing you’ll see.

Actually there are two bridges over the Prak Pah Strait. The older smaller bridge was built in 1967, before that people arrived by ferry. It’s 600 meters long.

Both bridges are free to cross.

When the new bridge was built the original bridge was renovated. The middle section was raised to allow boats to pass under, and a watchtower was added. It is now a pedestrian only bridge, cars cannot get over. It has become a popular place to stop and take a photo. It’s also popular with local fishermen. Local kids jump off and swim to the bank, the currents are fierce.

Sarasin Bridge is notorious as a place to attempt suicide. In 1973 the bridge was the scene of a double suicide pact. Local bus driver Khun Dam, had fallen deeply in love with his childhood sweetheart Gew. Her rich parents were not keen on their daughter’s relationship with the poor boy from Phuket and they forbid the union.

Legend says that Gew’s father would not allow her out of the house, keeping her locked up for days on end. Knowing that the father would never consent to a marriage, a pact was made. They decided to commit suicide. So they went to Sarasin Bridge, tied themselves together with a loincloth and jumped. When their dead bodies were recovered they were still locked in embrace.

Just over the bridge, on the Phang Nga side, there are some market stalls which mostly sell pineapples and dried fish.

Just around the corner you will then find the Thanoon Seafood restaurant on the beach, a good place for sunset drinks and dinner. Look one way and you see the bridge, look the other way to the Andaman sea.