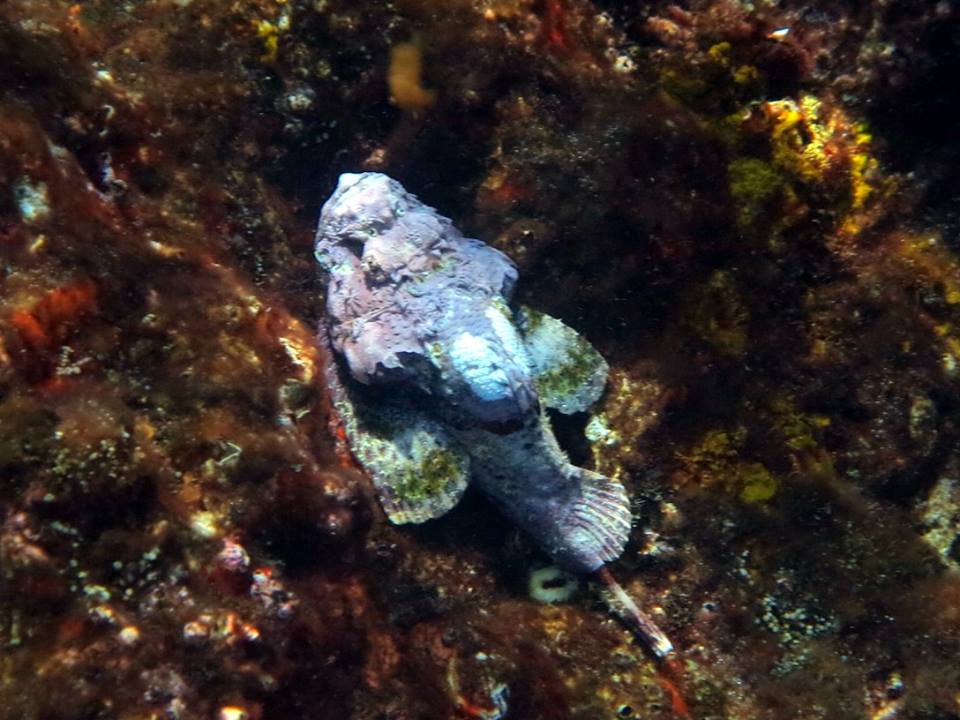 All you need to know about scorpionfish

Scorpionfish (Scorpaenidae) are present in large numbers in the Indo-Pacific region but many snorkelers will never spot them because scorpionfish are masters of desguise on the reef. They can be anything from 10-50 centemetres long with colours and markings that blend in with the surrounding coral. Some species can also change their colour and some look like reef flora (weedy scorpionfish and leaf scorpionfish).

The most easily spotted scorpionfish on Thailand reefs (other than the lionfish which swims freely) is the tassled scorpionfish. Harder to spot is the stonefish. Even harder still is the rae and beautiful weedy scorpionfish (Rhinopia).

Most scorpionfish are inactive during the day and hunt at night, they eat smaller fish and crustaceans which they can stun with their venom. Scorpionfish also lay in ambush for prey. The split second movement as a scorpionfish opens it’s large mouth to swallow it’s prey causes a vacuum that sucks in the unfortutate passer by. (A feeding scorpionfish is a highly prized photo by underwater photographers).

Scorpionfish have highly venomous spines which they use to deter predators. Their venom, if injected, is very painful and in some cases deadly to humans. This is just one of the reasons that your snorkeling guide tells you not to touch the reef with any part of your body. Stonefish are a species of scorpionfish that camouflage themselves by allowing algae and hydroid growth on their bodies. They are less commonly seen on Thai reefs, looking like a fat rock or lump of coral. Stonefish can quickly bury themselves in the sand so only their head is showing whereas scorpionfish tend to sit on top of coral or rocks.

Scorpionfish are not aggressive to humans. Normally if a diver or snorkeler gets within a few centimetres of accidently touching a scorpionfish it will raise it’s dorsal fin spines as a warning. If that does not deter then the fish will give a quick flick of it’s fins and swim a short distance away before settling back on the reef. Stonefish however cannot move so fast because of the algae growth on their bodies, they tend to waddle slowly along the bottom. This, plus the fact that they often hide in the sand in shallow areas, is why swimmers and beach goers are most often stung by stonefish. Australia has several cases per year in Queensland and the Northern Territory. (Beach walkers have even been stung because stonefish can live out of the water for up to 24 hours).

Scorpionfish sting symptoms may include intense pain, swelling, numbness, tingling, blistering and bleeding around the wound. More severe reactions could include vomiting, shortness of breath, bradycardia, seizure or death.

Sting victims should be transported to a medical facility as soon as possible. In the field treatment of scorpion stings is to get the victim out of the water to prevent drowning and then apply hot water as hot as the patient can stand (40-60 C). The venom is heat sensitive so heat should be applied for one hour or longer to neutralise it. In the rare event that stinging spines are still in the would they can be carefully removed with tweezers. There is an antivenom available for stonefishfish stings.