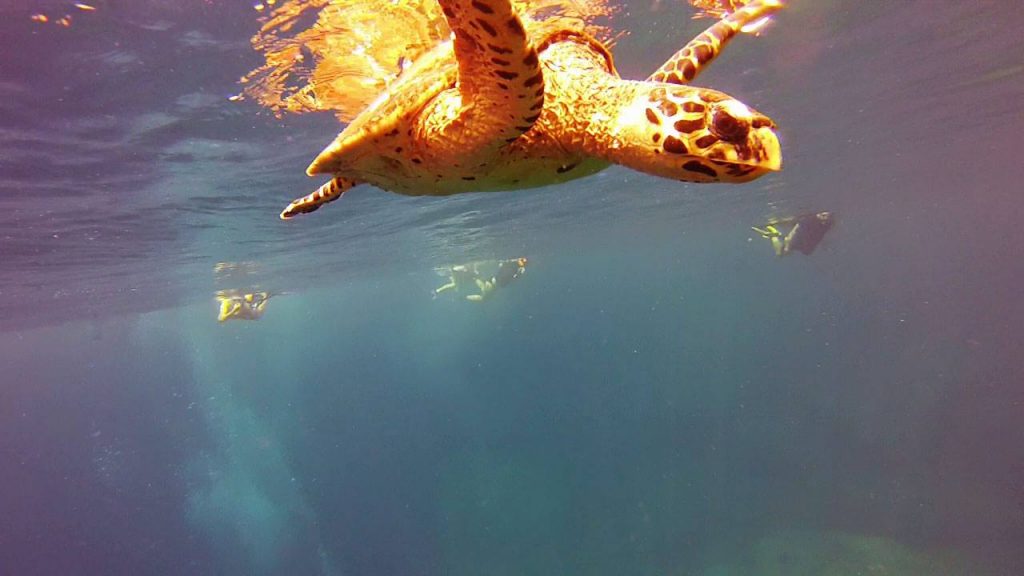 No marine life encounter is guaranteed but the chance of snorkeling with sea turtles whilst in Thailand is pretty high. Turtles can be seen almost anywhere, the most common places are the Similan Islands (mooring rocks, island number 9), the Surin Islands and the Phi Phi Islands.

The most common types are the Green turtle (Chelonia mydas) and the Hawksbill turtle (Eretmochelys imbricata).

Some facts about sea turtles The most commonly seen sea turtles while snorkeling in Thailand are the Green sea turtle and the Hawksbill turtle.

Hawksbill’s tend to be a bit smaller and have a more vibrantly coloured carapace. A Hawkbill’s shell has a more sharply serrated edge. Their head is narrower with a more pronounced, hawk like bill that they use for getting at sponges, their favourite food.

Green turtles eat almost exclusively sea grass. They do not have a green shell, it’s shades of brown. They get their name from their greenish meat fat which probably comes from their diet.

How to snorkel with turtles

If you are lucky enough to be in the water with a sea turtle the best way to observe them is from a short distance away. Try not to harass or scare them, certainly don’t try holding or riding them. A turtle could bite you but probably what will happen if you harass it is that it will swim away (they are faster than they look) and that’ll be the end of the encounter.

Most species of sea turtle are on the endangered species list. Adult sea turtles are at threat from human behavior such as injuries from boat propellers, being caught in fishing nets, poaching and pollution. Coastal development is threatening turtle nesting grounds and climate change is thought to be resulting in a greater proportion of female turtle births (warmer sand means quicker gestation periods and more female births).

Turtles often mistake plastic bags floating in the ocean as jelly fish, one of their preferred foods. If they eat the bags they can suffocate.  Please take your trash home with you. One thought on “Snorkeling with Sea Turtles”