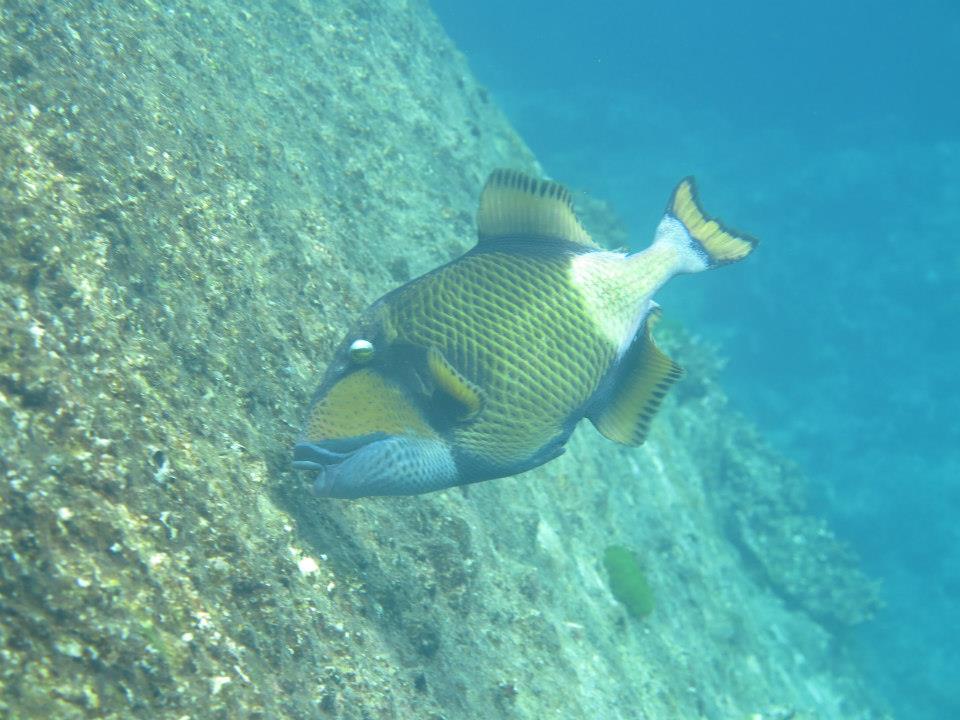 Triggerfish (family Balistidae) are large reef fish with oval bodies. They are common on Thai reefs and have a reputation for being aggressive. This reputation comes from the territorial nature of the male Titan triggerfish who guard their nesting grounds from reef level up to the surface and will charge scuba divers and snorkelers who they feel threatened by. Triggerfish have sizable teeth and can easily drawn blood.

You can see when a triggerfish is angry because it’s dorsel fin pops up. The best defense is just to keep clear. Try to swim around them rather than over the top. If necessary you can kick them away with a flap of your fins but they may make a few runs at you to show they mean business. It is really only the Titan triggerfish that is aggressive. Other species such as the clown trigger and smaller orange lined trigger are more shy. Red toothed triggerfish, which are common around the Similan Islands, are very shy. Most trigger fish are solitary but red toothed triggerfish stay together in groups and will swim into coral crevices as soon as you swim too close.

Clown triggerfish are considered especially beautiful and are popular in aquariums, hence they are often caught by fisherman and we see fewer of them on the reef.

Triggerfish have been shown to be relatively intelligent fish that can learn from past experiences and can use rocks as tools to smash shell fish. You can observe them feeding by digging in the sea bed or rocky coral areas and nest building by moving lumps of dead coral. Their behaviour kicks up a cloud of sand which other smaller fish such as goat fish or moorish idols take scraps from. Trigger fish will also keep a reef healthy by eating invasive species such as sea urchins or crown of thorns.