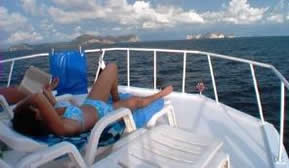 Paradise is popular! Many people visiting Phuket seem surprised by the number of tourists here. The island gets about 6 million passengers transiting through Phuket airport each year.  Added to these are backpackers travelling overland and domestic tourists, a new and fast growing group. All these people want to do day tours to the tourist attractions that they’ve heard about. Many of you are looking to see these sights without quite so many other tourists around.

You can avoid the mass package tourists by staying in a quieter part of Phuket or heading to Khao Lak. You can come in the low season when arrivals are significantly lower. Tours and beaches are slightly quieter during the week than at weekends. At weekends Thai tourists as well as weekenders from Kuala Lumpur, Singapore and Hong Kong arrive in Phuket.

You can also choose tours that limit numbers to a reasonable level so that you don’t feel like you are being herded around. That normally means paying more for your tour, if an operator cuts the number of passengers by half they must charge the remaining half more. As a simple rule of thumb if a boat tour is cheaper than all the others it will have more people on it. If you are a Russian or Chinese package tourist then may not mind that but we hear from lots of people who would rather pay a little more for some exclusivity. Have a look at these photos…

This is a fairly average speedboat to Phi Phi that takes 45 passengers. They need that many people to pay for the 3 x 225hp Honda 4 stroke outboard engines. It’s not over crowded in the dangerous sense, it’s just full with no room to move about.

This is a similar speedboat disembarking 45 passengers at the Similan Islands. Again, not over crowded but full.

Part of the problem is that there are lots of these boats, as I said, paradise is popular, and they all go to the same place. If 6 or 7 boats all go to the same reef for snorkeling you end up seeing more legs than fish underwater..

The other problem is logistics. It takes time to get all these people from their hotels to the boat each day so pick ups start early and there is usually a lot of hanging around. It takes time to get everyone onto and off of the speedboat several times per day, that means lots of queuing up. You can also expect to queue for your food at lunch time. The poor tour guide is more like an airline steward than a snorkeling guide, he doesn’t have time to show you anything underwater, he’s too busy counting heads.

How to avoid the crowds

1. Come to Phuket out of season

For uncrowded Phi Phi Island tours from Phuket we have two tours that do not run with 50 people in a speedboat. This tour limits passengers to 25: www.snorkelingthailand.com/phi-phi-deluxe-plus-tour-6-islands/

For uncrowded Racha Yai day trips we sell a premium Racha Yai snorkeling tour on which we limit numbers to a maximum of 10 passengers. This is a new tour that we run ourselves in response to feedback from guests who say they are prepared to pay a little more for a higher quality experience. Limiting numbers means that we can pick you up from your hotel a bit later and get you to the boat quicker. There is less hanging around at the pier, you will be at Racha Yai within 30 minutes of leaving Chalong bay and into the action. Limiting numbers means that our guide can really take care of you, get to know you. Limiting numbers means that we can use a smaller boat with smaller engines that are a bit quieter, so you can hear each other speak on the speedboat. You have space to move around on the boat. You don’t have to join a long queue to get on and off the boat. There is enough space in the shade for everyone, or in the sun if you prefer. In the water you can enjoy the coral and fish without 50 other pairs of legs thrashing around. For lunch you can have an intimate picnic or a sit down meal at a local restaurant, not queue for a luke warm buffet. We think you’ll appreciate the difference when you see the other tours leaving the islands one hour earlier than you because it takes so long to get them all back to their hotels.

This is a better way to reach the Similan Islands than in a crowded speedboat.

With liveaboards you get the beaches and reefs to yourself.

We had 10 passengers plus staff on this boat to Racha Yai last week. This is as crowded as it gets.