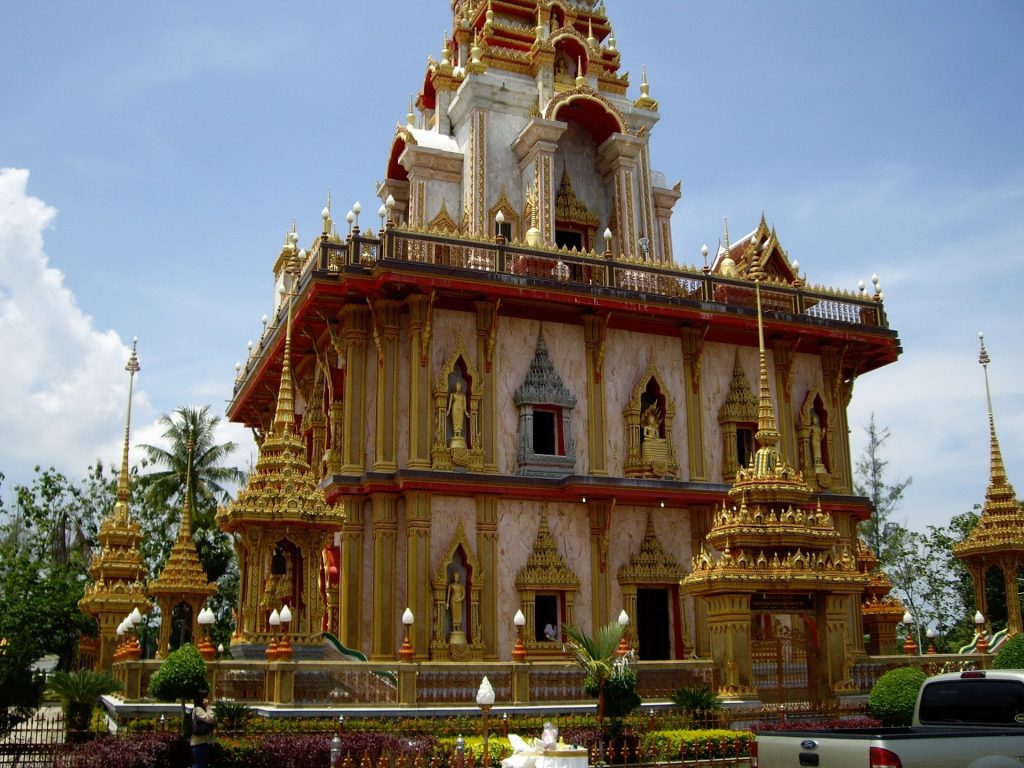 Wat Chalong is one of the most important temples on Phuket and probably the most visited by tourists.  Wat is the Thai word for temple. Wat Chalong is the colloquial name, the real name is Wat Chaiyathararam.

Wat Chalong Phuket has a magnificent temple building along with many other buildings to support the religious needs of the locals.  Located on the southern end of the island, it is close to Chalong pier and the Big Buddha temple / viewpoint, if you visit Wat Chalong you should also detour to the Big Buddha.   You can plan a full or half day tour around the south of Phuket to also include Rawai and Promthep cape.

Wat Chalong was originally built over a century ago and was dedicated to the memory of two monks, who with their knowledge of herbal medicine helped the injured of a tin miners rebellion in 1876. The temple still provides a sanctuary for Buddhists from all over the world who come to pray for Buddha’s assistance and help in their lives.

There are many statues of monks and figures that have played an important role in the history and legend of Wat Chalong. One of the temple buildings houses the statues of Luang Poh Cham, Luang Poh Chuang and Luang Poh Gleum, all ex-abbots of the temple. They are all credited with helping Ta Khee-lek (grandpa Khee-lek), a famous local who won many lotteries after consulting the Pohs.

So if you are gambler this could be a place to pray for luck, it is traditional to paste gold leaf on the statues of the three abbots as an offering when asking for good luck. Another practice is to shake a vase filled with numbered sticks until one of the sticks falls out. Once the stick has fallen to the floor, you go to a cabinet around the corner to retrieve your fortune from the appropriate numbered bin. (You will need a Thai who can translate it for you). The grand pagoda dominates the temple grounds and contains many pictures depicting scenes of Buddha and a vast variety of Buddha statues in different poses and most importantly, a splinter of Lord Buddha’s bone.

Whilst Wat Chalong is a popular tourist attraction during the day it is also an active place of worship so please show the proper respect during your visit. It is possible that your visit will co-inside with a Thai wedding or funeral. Visitors should dress appropriately, no bear shoulders or midriffs or short length shorts. Shoes should be removed when entering temple buildings. Speak in quiet tones and do not touch religious statues or Buddha images.

Food and drink stalls, souvenir stalls and public toilets are all on site. There is no entrance fee to the temple.